Medicaid expansion in Virginia will be a major issue in the special session of the legislature that begins on April 11. To understand the issue better, I looked at other rich Western countries and compared the quality and cost of their healthcare systems to ours.

The results were stunning:   Americans pay more for healthcare with worse results than in any of the countries I sampled.

The facts speak for themselves.  The UK, for example, is the poster child for  “socialized medicine” in US healthcare debates.  But at every stage of life, the UK system has better results than ours. Fewer babies die at birth. Fewer adults have chronic conditions like arthritis and high blood pressure. The elderly live longer.

But here’s the real shocker: healthcare per person only costs 38% of what it costs in the USA.

In the UK (where I lived with my family for nine years), no one pays a penny when they get sick. They just see a doctor and get care. They pay for it, of course, in general taxation, but the costs are spread throughout the population and the system is more efficient as it covers the entire country, so costs per person are much lower than in our country.

The  UK is not alone in delivering far better healthcare at far less cost. This table shows that on every metric we pay more and have worse outcomes than our peers. 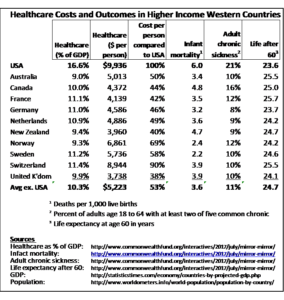 The reason for their better performance is simple : every one  of these countries except us has universal healthcare.

“Universal” does not have to mean “socialized”.  In some countries, like Switzerland and the Netherlands, patients receive healthcare through insurance companies that offer a variety of policies. This is not very different from our system, but there is one critical difference: the entire population, by law, is enrolled in insurance, including younger, healthier people.

With universal coverage, healthcare systems can achieve economies of scale, including bulk purchasing.

Of course, younger, healthier people will cost less to treat then older, sicker ones, and a universal system will need to even out the cost. But this is the same principle as Social Security.  Social Security is a bargain we make with ourselves as a people: we pay today so that we may receive benefits tomorrow. Universal healthcare  is similar –those who are healthy today will one day be sick. One party subsidizes the other so the system will be around to take care of them when they need it.

Let’s hope that the legislature in Richmond will take the federal government’s offer of free money and expand Medicaid. It will not be universal healthcare, but it will be a step in the right direction.

Brad Swanson is the editor of The Blue View. He is an international investment manager and previously worked as a diplomat and journalist.

1 thought on “Americans get the worst healthcare for the most money– why?”