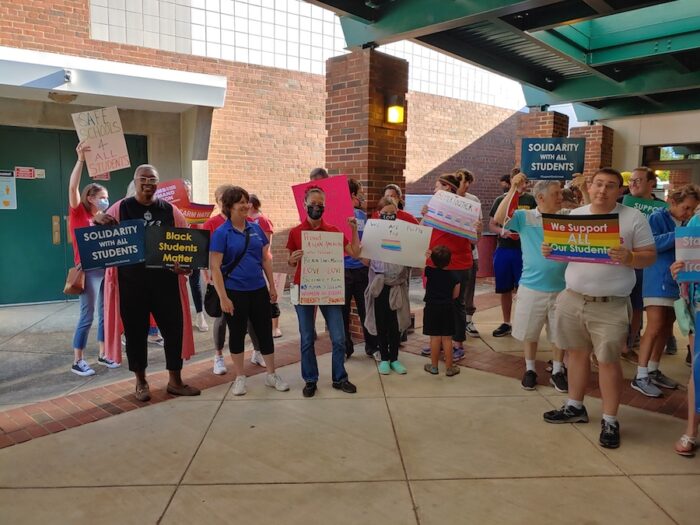 This article was written by Marcus R. Motta, a retired federal law enforcement officer with 32 years of service. He is a member of the Springfield District Democratic Committee.

Members of the Fairfax County Democratic Committee (FCDC) gathered at the entrance to Luther Jackson Middle School at 6:00 p.m. on June 17 to show support for the Fairfax County School Board, which was meeting at the school that night. The board and its policy against full in-person schooling during the pandemic have been relentlessly attacked by the Open Fairfax County Public School (FCPS) Coalition. Open FCPS has been spearheading a movement to recall board members Abrar Omeish (Member-at-Large), Laura Jane Cohen (Springfield District) and Elaine Tholen (Dranesville District). The group claims to be non-partisan but accepted $55,000 in donations from a Republican operated PAC called N2 America Inc. this year.

Saehee Perez opened the gathering with a powerful speech supporting the board’s movement toward greater equity and inclusion. She called out groups such as Open FCPS for slowing that progress by pressuring the board to permit in-person school since the beginning of the pandemic. She also pushed back against the claim that the board was succumbing to union pressure and was putting kids last. The board “understood the science of Covid-19 and listened to the guidelines,” Perez said.

Mat Savage, who spoke next, shared his personal experience struggling with ADHD and Dyslexia. He left Catholic school for the better resources that Fairfax County offered, he explained. Savage accused Republicans who attacked the board of “attempting to score political points at the expense of students.”

Sujatha Hampton made reference to flyers found near the residence of one of the board members. Purported to be from the Ku Klux Klan (KKK), the flyers attacked the board. “I’m afraid,” Hampton said, “because there are students in our collective care and the KKK is out.” Undaunted, she added, “We might be scared, but we cannot be quiet!”  She criticized the board’s opponents for trying to call the KKK recruitment flyers a “hoax.”  Hampton also spoke of the decades of work it has taken to reach the current level of equity in the school system and how the forces working against the schools are outraged by that progress. They want to beat back even this “incremental, maddeningly slow, inching toward equity,” she said. The teachers and the school board have been abused all year over this issue, Hampton noted, but “the arguments were in bad faith–the point was the chaos.” She added that a small minority of vocal people are responsible for the chaos, noting that the best antidote to it is “our numbers, our unity, our voices getting loud.”

Delegate Simon gave a short history lesson describing the historic significance of Luther Jackson Middle School, which was created as a segregated school for African Americans when it was first opened in 1954.  “We cannot go backwards, we will go forward,” he said, adding,  “I am proud to be a champion for trans students,” and “every child needs to be treated as the most valuable child in the world.” Simon also commented on the KKK flyers, stating, “I’m not saying everybody who is supporting Open FCPS supports the KKK, but when the KKK is on your side, you need to rethink your priorities.”