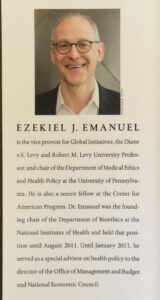 Lisa Singer is a member of Mason District and a member of the National Affairs Committee of the Fairfax County Democratic Committee (FCDC).

Even if you’re long past wanting to read more on the topic of health care, Ezekiel J. Emanuel’s book Which Country Has the World’s Best Health Care provides such an engaging look at this complex and endlessly debated issue that readers might want to make an exception.  This is a book not just about a comparative analysis of 11 countries’ health care systems but also about how each country prioritized specific values that colored which policy options they adopted as they developed the system.  Put another way, Emanuel states “every country’s health care system is driven by a core national value” which makes the system specific to that country; utility for the UK, responsibility for Germany, equality for France, and liberty for the United States.  Emanuel starts by establishing a few points that are supported with an abundance of data throughout the book: First, no health care system is best at everything; second, some problems are common to all 11 countries – providing mental health care efficiently, containing the rising cost of chronic conditions, high and rising cost of drugs – and, finally, while the US could learn from other countries, no other country’s health care system can be “imported wholesale” as a way to fix its health care system issues. The book’s conclusion, 6 lessons for improving the US health care system, includes addressing the impact of Republican attacks on the ACA.

1) The author chose 11 countries that: have different kinds of financing and delivery systems; are some that we’re familiar with and some we’re not; and have plausible claims to being ideal systems.

2) He compares the countries’ systems based on 8 areas, including origin of the country’s health care system, financing, coverage, and prescription drug regulation.

3) He uses the term “path dependent” to explain how each country’s health care system today is a result of past policy decisions that reflected each country’s politics and culture. For example, in 1948 Harry Truman pushed for enacting government-provided universal health insurance but Congress, which was worried about socialism at the start of the Cold War, would not vote on Truman’s proposal.  At the same time, the British government published a leaflet entitled “Your New National Health Service” which informed the public that it would provide them “with all medical, dental, and nursing care…” but that it wasn’t a charity and stated: “You are all paying for it, mainly as taxpayers…..”

1) United States.  Population – 331 million.  The US’s “patchwork” health care system is regulated by governmental and private organizations (licensing boards, FDA, etc.) which have both shaped how the system operates and constrained what reforms can be instituted.  Despite its under-performance in most key areas – coverage, quality, cost – the US is exceptional at innovation

3) UK.  Population – 68 million. The largest single-payer and socialized health care system in the world, most people like the system but blame the government for its shortfalls, including a growing shortage of physicians and other health care professionals, long wait times, and lack of funding.  About 11% of UK’s population also has voluntary, private health care insurance.

4) Norway.  Population – 5.3 million. Socialized health care system has many strengths but the system is based on two sectors – primary care and specialist care – that contribute to all 6 of the system’s challenges, including; poor coordination between primary and specialized care, wait times, and being a physician-centric (not patient-centered) system.

6) Germany.  Population – 84 million. The Health Insurance Act of 1883 created the world’s first statutory health insurance scheme that has survived different forms of government (an empire, republics, dictatorships), 2 world wars, hyperinflation, and the division/reunification of Germany.  Challenges include too many hospital beds and hospital admissions which monopolize the nursing force, and the system’s 100+ sickness funds that create inefficiencies.

7) Netherlands.  Population – 17.1 million.  Almost 100% of the population has health coverage under a compulsory statutory health insurance system and there are stiff fines for not having insurance. 85% of the population also buys private supplemental insurance. Challenges include cost and cost growth overall, which is affected by the long-term care costs that are also covered by this system.

8) Switzerland.  Population – 8.4 million.  Swiss love their health care system. They can choose any doctor and any hospital in the country. There are no wait times. While everyone with an income is required to be enrolled in a health insurance plan, everyone – citizens, physicians, health policy experts – is concerned about the country’s unwillingness to control runaway costs.

9) Australia.  Population – 26 million. Australians can use public hospitals free of charge, but wait times are long and they have little choice of physician or surgeon. About 50% carry private insurance (even then, there can be waits for services such as cancer chemotherapy). The government promotes this “jumbled system” of public and private health care, despite the payment and health care coordination challenges it poses.

10) Taiwan.  Population – 24 million. Almost 100% of residents have insurance through the government’s comprehensive health system.  “We go to the hospital like it’s the shopping mall.” Patients can go to any doctor and any hospital in the country. Patients can also order blood tests or MRI scan themselves and have the system pay for them. But care is austere; physicians see up to 90 patients a day, and families are expected to provide custodial care for their relatives who are hospitalized.  However, care is usually timely and national health care costs are about half those of other systems.

11) China  Population – 1.4 billion.  It is close to providing health insurance to almost the entire population.  However, most payment for medical services is still out-of-pocket, there are only 2 health insurance schemes for the entire population, and the deep corruption that runs through the system includes doctors who take kickbacks and bribes.